106 Greene Drive | Yorktown, VA 23692 | 888-VA-EVAL-1 or 888.823.8251 | Fax: 757.224.6830 | Email: info@basesofva.com
0
Valpar International has announced that it will be closing in March of 2020. This in no way affects Bases of Virgnia, LLC and we will continue manufactuing Valpar Work Samples as well as parts and supplies. This is only affecting the software that Valpar International currently sells and supports.

Please contact Nancy Scott at info@basesofva.com or by calling 888.823.8251 for work sample prices. 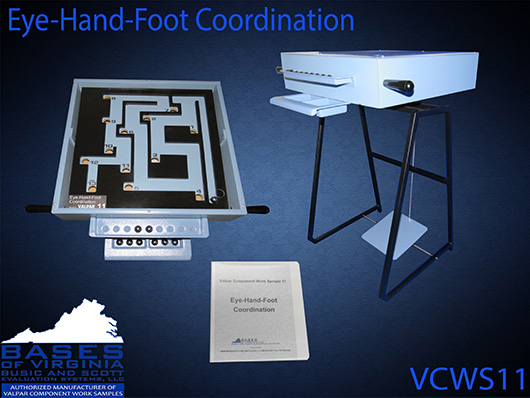 The work sample elicits information on several work-related characteristics, including, among others, concentration skills, the ability to follow instructions, frustration tolerance, and self-confidence. The work sample is particularly suited to various work-hardening purposes.

Design: Work sample hardware is manipulated and pedalled by the evaluee in three timed rounds.

Special Features: Scores may be interpreted against criterion-referenced standards, supplied norms, or locally developed norms. It is appropriate for use with disabled or nondisabled persons.

Information Collected: The work sample has been analyzed according to U.S. Department of Labor job analysis techniques. The result of the analysis is a list of rated DOL aptitudes, physical demands, and other factors collectively referred to as the Worker Qualifications Profile (WQP) of the work sample.

The evaluee sits in front of the work sample and, using handles and a foot pedal, moves steel balls through a maze as far as he/she can and as quickly as he/she can, until they fall into one of 13 holes on the surface of the maze.

To move the balls, the maze is tilted to the left or right with the hands. The foot pedal is used to tilt the balls forward and backward.

A complete administration contains three timed, nine-ball rounds. When the balls fall through holes in the maze, they are returned to a ball drawer beneath the maze. After each round the balls are replaced to their starting position in a ball tray connected to the work box.

The most important dimension of skill on VCWS 11 is assessed by points, but there are also time standards that must be met. The evaluator records which hole each ball falls into; the farther along the balls go, the more points are earned. The evaluator also times each of the three nine-ball rounds. The faster the evaluee performs, the better the rate of work score.

Components: The work sample is a box, composed of particle board and covered with blue plastic laminate, 21″ square x 4 7/8″. The box is covered with 1/8″ clear plastic. At the bottom inside of the box is a maze with 13 holes. A ball tray is mounted to the front of the box, and there is a sliding ball drawer situated beneath the maze. The box assembly is mounted on a 3/4″ tubular metal frame. A foot pedal attaches to the bottom of the frame with a 1/4″ metal rod connecting the pedal to the maze. There are handles mounted on both sides of the work box. The work sample comes with nine steel balls, a manual, and a pad of 100 scoring sheets.